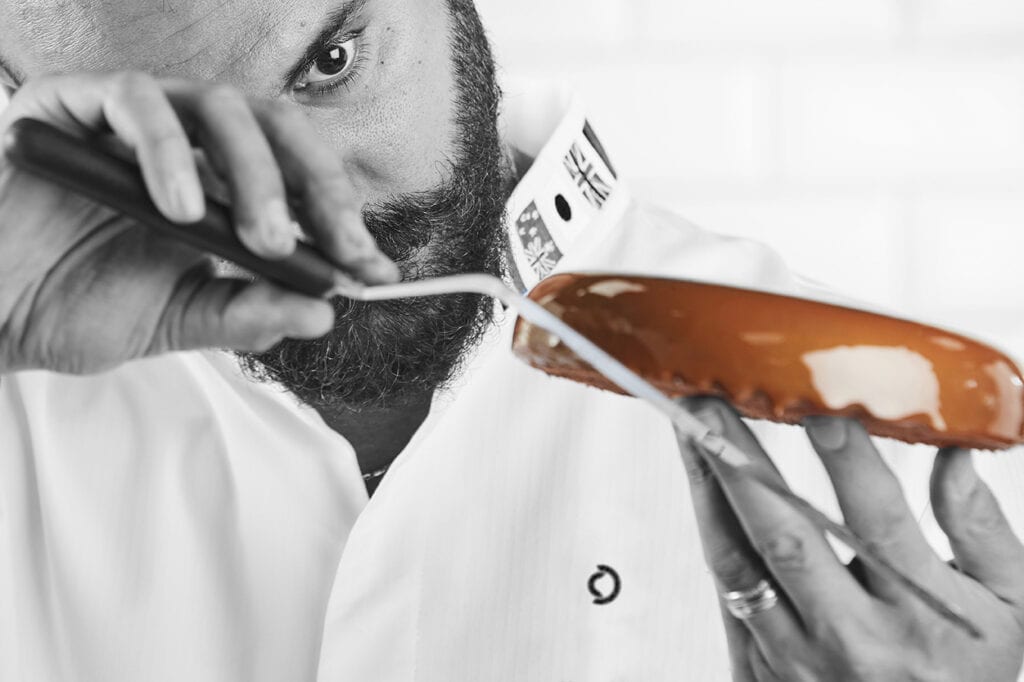 “If I go back in my memories, my life has always been infused with the flavours of my mom’s kitchen and my parents love for art. I was born in Milano, on the 12th of February. My mother and father were both photographers – working hard in the buzzing city of Milano, where fashion, lifestyle and design ran in everyone’s blood. And as a thoroughbred Italian: the love for good food.”

As a young kid, I helped my mother with making home made cakes and our traditional Sunday pizza. For me, it was a world that opened up. I loved making doughs, experimenting with ingredients… and the passion for pastry grew on me.

As I grew up, I had to make choices. Tough choices. Undecided between art and pastry, I finally chose to follow pastry & bakery school during my adolescence. So there I was, 13 years old. Every day, after school, I rushed to the bakery in our neighbourhood to practice what I had learned. In the weekends, I helped out in a gelato shop to learn about the magic of ice cream.

My teachers picked up my enthusiasm for the profession and spurred me to do my first internship at Pasticceria Martesana. It was one of the Milanese pastry houses with a vibrant culture. A wonderful place that fed my enthusiasm and growth. Working there felt like a tailor-made jacket – fitting perfectly on me. So I decided to keep working there after school until I graduated in 1996 as a baker and pastry chef at CAPAC in Milan.

“I was hired by Pasticceria Martesana. That magical place set the start of my professional career. I was thrilled, being able to learn and experience
the ins and outs of a thriving artisan in pastry.”

“I had a dream and a burning ambition.
I wanted to become one the best pastry chefs in the world.”

I was 16 by that time. After graduating, I was hired by Pasticceria Martesana. That magical place set the start of my professional career. I was thrilled, being able to learn and experience the ins and outs of a thriving artisan in pastry.

Four years later,  I opened my business in the province of Milan for 4 years. It was a great exciting time, tasting entrepreneurship for the first time. And even though it became an instant success, I missed the energy of Milano very much. I made a tough choice to return to the city where I belonged. A city that offered me all the possibilities to grow.

When I returned to Pasticceria Martesana, I had a dream and a burning ambition. I wanted to become one the best pastry chefs in the world. I started as head chef and took over the management of the pastry kitchen. And every day felt like a new dawn. I took on every challenge I could to amaze, surprise and leave lasting impressions with what we created there. I absorbed like a sponge, learned, acquired new skills, met the most amazing chefs in Italy and broadened my horizons both inside and outside the pastry lab.

During those exciting years, I discovered my love for chocolate. The food of the gods not only was a heavenly gift to taste and explore. To me, it was the perfect raw material to work with. Like a raw diamond, chocolate allowed me to shape it, sculpt it, polish it. Remember my adolescence, where I was torn between the passion for art and the love for pastry? With discovering chocolate, I finally found my canvas to fully explore my artistic potential.

I wanted to shout out my passion, and share it with the world. That’s how I decided to start participating in competitions. Local still at first, to understand what competitions were about. And soon I moved to the international stage to put myself to the test. More than winning, the competitions really stimulated me to meet other chefs, exchange ideas and further grow. That’s how I gradually became a better chef and was fortunate to win my first awards. The epitome in this journey was participating and winning the World Chocolate Masters in 2013 – the world championship for professional creativity with chocolate.

Being the first Italian chef to have won this award was a great recognition. It also shaped my mission: bringing Italian patisserie to a higher level on the international platform. It started with creating and building a brand new, hyper modern laboratory for the Pasticceria Martesana to further increase the quality and renew the pastry offering. But quality and innovation also require a strong team. That’s how I also became a teambuilder and coach: giving the best of yourself every single day is what every team member cherishes as a credo.

In 2016, I accepted a new challenge and took the helm of Barry Callebaut’s Chocolate Academy™ in Milan: a school focusing on exchange with and training for professionals in working with chocolate.

It was another wonderful experience. Working for Barry Callebaut, expanded my horizon.

Many conversations with chefs and artisans from around the world gave shape to my next big dream. In parallel to my work for Barry-Callebaut, I launched my own haute chocolaterie brand: Davide Comaschi Milano. Producing collections of chocolates for distribution in luxury department stores.

On 26 October 2020, I also received the award of Master of Art and Craft (MAM). I am proud to have received this award, which is traditionally reserved to mark a lifetime achievement by Italy’s greatest masters in patisserie.

Today, I continue my dream in collaboration with the Cerea family of the Da Vittorio restaurant in Brusaporto, Bergamo, developing more unique chocolate products centered around design and a unique sensory experience. I want my products to be extra-ordinary. In the way they look, taste, smell and are packed. Because chocolate is luxury. But I want it to be a luxury that is affordable for everyone. That can break the routines we are all in, and provide you with a moment of pleasure for all your senses.

“Chocolate is luxury. But I want it to be a luxury that is affordable for everyone. That can break the routines we are all in, and provide you with a moment of pleasure for all your senses.” 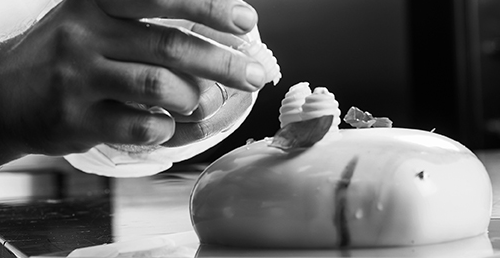 Discover how our team’s credo helps us to create extra-ordinary sesnations for you to savour. 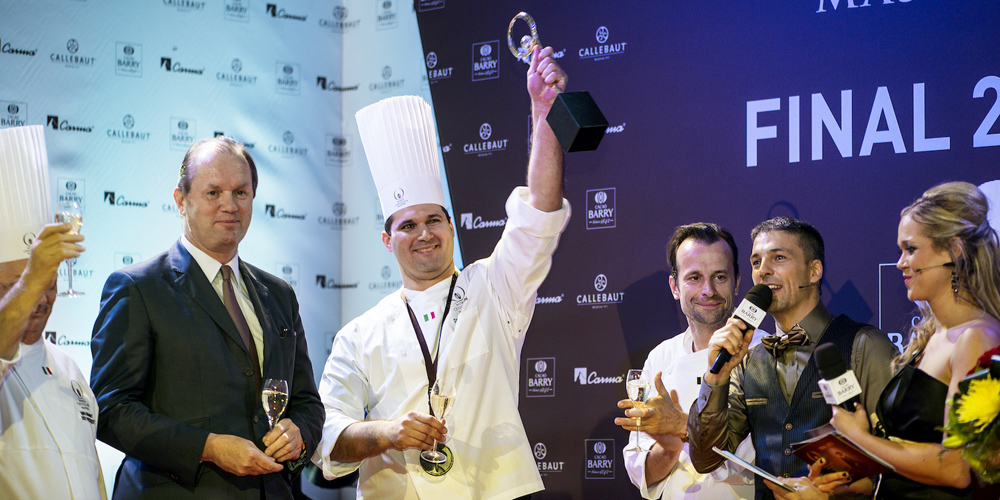 Davide Comaschi has participated in the world’s leading chocolate and pastry competition. Explore his journey and achievements 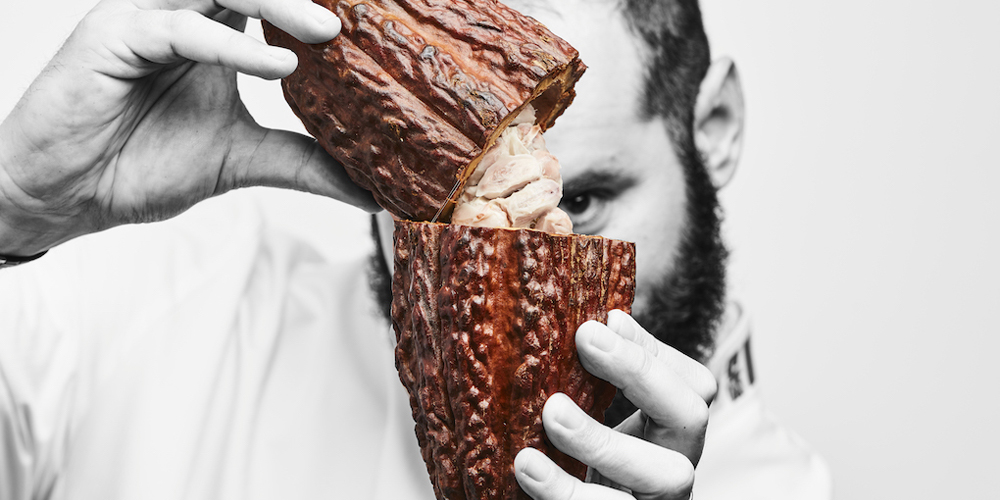 In our quest for the perfect chocolate, the selection of the cocoa beans for our chocolates is essential. Davide takes you on tour and explains the choices we make.


Notice: Trying to access array offset on value of type null in /data/sites/web/davidecomaschicom/www/wp-content/plugins/elementor-pro/modules/nav-menu/widgets/nav-menu.php on line 1445

Notice: Trying to access array offset on value of type null in /data/sites/web/davidecomaschicom/www/wp-content/plugins/elementor-pro/modules/nav-menu/widgets/nav-menu.php on line 1458

Notice: Trying to access array offset on value of type null in /data/sites/web/davidecomaschicom/www/wp-content/plugins/elementor-pro/modules/nav-menu/widgets/nav-menu.php on line 1469